Amsterdam, The Netherlands: The planet has been in the clutches of Code 19 for the past year and a half. The way humans have begun to put their protection, especially hospital protective clothing (PPE), into the environment has become the lifeblood of their innocent and speechless animals.

Beach or dry disposable masks are everywhere And they are distributing death among animals instead of extinction. Scientists have now warned that the garbage associated with Code 19 has entered the real homes and habitats of animals. These include rubber gloves, face masks and rubber cords, and clothing made of polypropylene.

Biologists at the University of Leiden in the Netherlands were shocked when they saw pictures of a fish caught in a glove on social media. gone. They then began a detailed study of the effects of corona waste. According to him, masks and gloves have become a trap for animals to be trapped and confused. Then pieces of it get stuck in the airways or get into the stomach and make them sick and kill them. 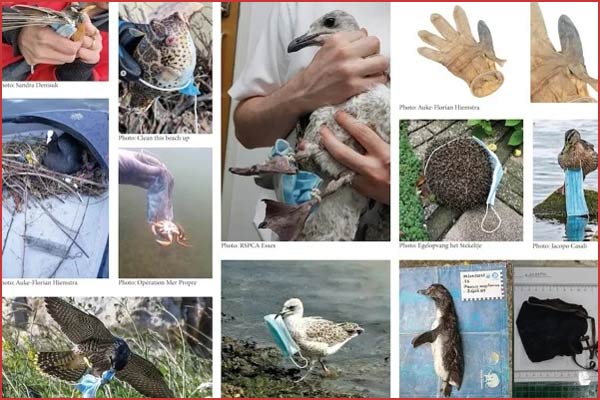 But the problem is not so simple, 3 million face masks are being thrown into the atmosphere every minute around the world. Are used once. This is now the case with 1.5 billion masks and gloves scattered on soil, water, mountains, gardens, fields, sea and land. When they reach innocent creatures, they turn from plastic to their death.

Scientists have also seen birds build nests out of this waste. An American bird has been spotted trapped in a face mask. The seagull has not been able to remove the rubber band stuck in its leg for weeks, while many large birds have been unable to remove the debris from their fingernails.

Are happening In addition, the bodies of penguins, dogs and other animals have been found after eating them. In addition, the plastics we are already pushing into the ground are being transformed into microplastics, becoming part of our bodies, including living things, and spreading their damage.

Experts say it would be better to repeat Disguised masks should be made common and if not possible, their cords should be cut before they are thrown away.

The bright yellow color of this frog helps it hide under leaves in the forest. …