Karachi: A ninth-grade student has developed a WhatsApp-style app with many options.

Syed, a resident of Federal B Area Nabil Haider Jafari is currently a ninth grader and he has named his app FF Meeting. The app was launched on the Google App platform on February 5 and version one has been downloaded by hundreds of people. As of 12 noon on March 6, the app has received more than 180 five stars. However, Nabil has said that his app has been downloaded more than one lakh times.

Zafar Abbas, the head of a nationwide welfare organization based in Karachi, has made a video of this promising young Nabil. Nabil claims that his app is end-to-end encrypted and has the option to add colors and fonts for visually impaired people. Similarly, for color blind people, there is a choice of colors that He can easily see.

Nabil said that his house is in dire financial straits and he collected money and bought a laptop for Rs. 10,000 and used it to create an FF (Friends and Family) meeting app. Started Now, after three years of hard work, the app is ready. 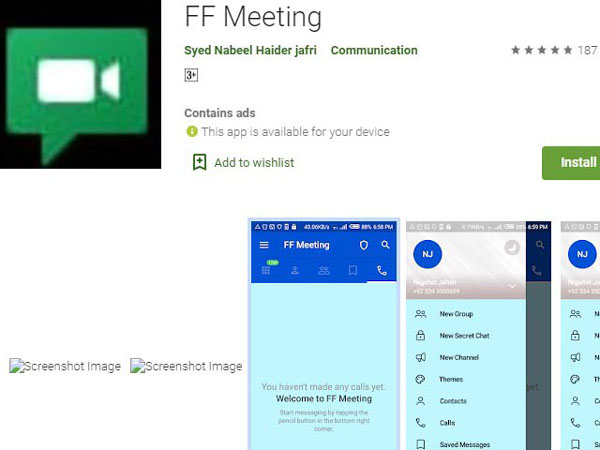 According to Nabil, he has been working on this app since the seventh grade, which has video calling and voice calling facility. There are many channels in this app and you can create channels at your convenience. He said that up to 200,000 people can be grouped in this app. While a message can be sent to five to six million people. There is also the option of secret chat which also has the option of automatic deletion.

Nabil has said in the video of JDC that he needs an Apple laptop so that he can encrypt the FF meeting. Make an Apple version. On this, Zafar Abbas of JDC assured him of all possible cooperation. Nabil said he would make an Apple version of the app in a year.