Amitabh Bachchan in his recent blog post only wrote that “medical The condition, “surgery”, can no longer write

Bollywood emperor Amitabh Bachchan But he is very active and keeps in touch with the fans from time to time, answering questions from them as well as providing information about himself, but his recent post made the fans worried and upset. 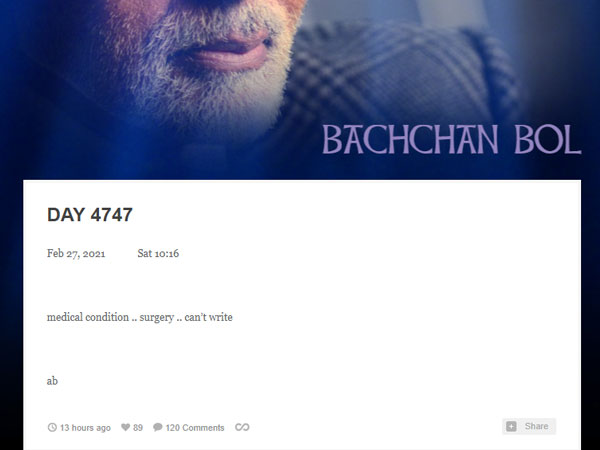 Legend Actor Amitabh Bachchan in his recent blog post only wrote that “medical condition”, “surgery”, can no longer write. These two words of Big B caused a wave of concern among the fans and they started asking him various questions on social networking sites.

It is not clear from Amitabh Bachchan's post which surgery he is going to have. Or he has undergone surgery and is no longer in good health. Fans have asked him various similar questions, but the legendary actor has not responded.

However, Amitabh Bachchan shared one of his photoshooting app He shared a new photo in which he hid his face with his hand, but instead of writing anything in the caption, he only posted question marks. This suggests that he may have undergone facial surgery.

It should be noted that a few weeks ago, other members of the Bachchan family, including the legendary Adkar, contracted the corona virus, including his son Abhishek, daughter-in-law Aishwarya Rai and Granddaughter Aradhya Bachchan is among those who recovered after a short stay in quarantine.